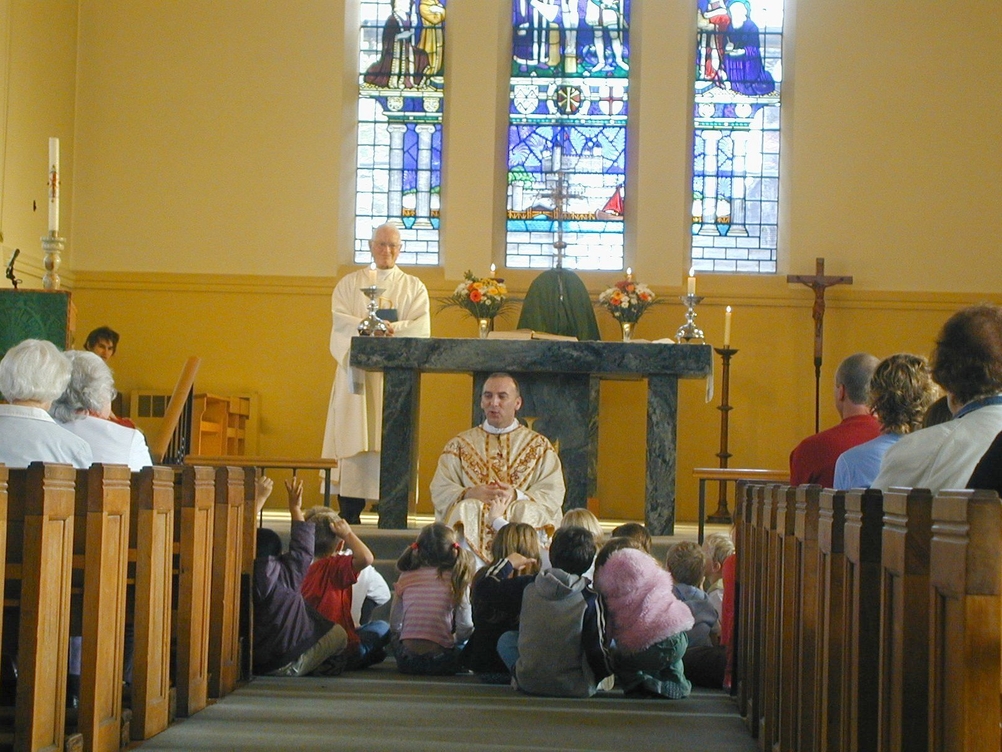 January: Fr Tony gave a talk in the Parish Hall illustrated with video and slides, about his recent visit to Nigeria.
Fr Murray Watson led "A Day With St Luke".

February: The Parish welcomed Father Douglas Perkins who celebrated the Masses while Fr Tony spent a few days in Rome to celebrate his 60th birthday with a Sung Mass in the Basilica of S.Nicola in Carcere, and he was present at a special Mass in St Peter's for religious. He stayed at the Czech College with Father Roman Titze and was joined by, amongst others, Aaron Spinelli from Eastbourne. Aaron was to be ordained a deacon in summer 2007 and to be ordained a priest in Eastbourne in the summer of 2008.
The Parish joined Fr Tony in the hall to celebrated his 60th birthday during the following weekend.
The Parish supported Seaford's Fair Trade fortnight with several fund raising events.

March: We received the sad news of the death of Sister Brigid in France. She had been a very active member of this community for many years, in different capacities, and was a woman of great integrity and courage. Fr Tony travelled to France for the Requiem Mass and there was a special Mass for her in St Thomas More church.
Click here to read the Homily for Sister Brigid's Requiem Mass including the funeral text and thanks from the Sisters of Providence.
There was a very real threat to our Catholic schools from proposals by East Sussex County Council to cut the provision of free transport to denominational schools. Parishioners were encouraged to lodge objections with their MPs and make their views known. Mainly due to this united action, the proposals weren't implemented.

April: Christopher McOustra led the Easter Pilgrimage to Rouen and Domremy in honour of St Joan of Arc.
By invitation from the parish, St Bartholomew's Polyphony Choir from Norbury sang at a 10.30 Sunday Mass.
Fr Murray Watson revisited our Parish.

May: St Anne's Day Centre for Homeless and Lonely People in Hove was the target of an arson attack. The damage to the building was substantial, though not disastrous. Volunteers worked very hard to get the Centre up and running again.
Father Tony was invited by the Bishop of Siedice in Poland to give lectures about the Church in England to the priests of the Diocese of Siedlce.

June: The children made their First Holy Communion and the annual "Corpus Christie" procession took place.
A number of parishioners took part in a walk through London in the footsteps of the English Martyrs. The walk was organised by the "Continuity Movement" which is led by the young people of "Miles Jesu".

July: We received some surprising news at the beginning of the month. Father Tony was asked by the Bishop to go to Bognor Regis as Parish Priest to replace Mgr Benny O'Shea who was moving to Esher. For more details regarding Fr Tony's departure and Fr Niven Richardson's appointment as new Parish Priest at St Thomas More, click here.
The Annecy Primary School Summer Fayre took place.
The Trustees regretfully announced the closure of Annecy Nursery in Southdown Road. This was due to the expiry of the lease with no prospect of renewal.
Fr Tony joined several priests from the Diocese on a trip to Rome for the ordination of four new deacons by Bishop Kieran Conry. One of the students being ordained was Aaron Spinelli from Eastbourne.
Fr Tony and eight parishioners joined Bishop Kieran and a group of more than 800 people from all over the Diocese for the annual Diocesan Pilgrimage to Lourdes.
Father Joseph who has a formal parish in the Gambia, visited us at the end of a busy and demanding year of study in Ireland to look after the parish during Fr Tony's summer absences.

August: Fr. Tony visited Slovakia with Father Roman and celebrated Mass with the Bishop of Nitra. The Diocese of Nitra was established by Pope John VIII in 880. It is the oldest diocese in Central Europe.

September: The annual pilgrimage to Walsingham took place.
Fr Tony's last Mass as parish priest of St Thomas More Church, where he had served since1999, took place on Sunday 23rd September. The parish choir and the Youth band helped to make this a memorable occasion. Fr Tony thanked the parishioners for their support during the eight years he had been in Seaford.
Click here for the text from the homily of that Mass.
The Mass was followed by a farewell party in the parish hall. Parish Chairman Sheila Robinson thanked Fr Tony on behalf of the parishioners for his work in the parish and expressed their blessings for the future in his new parish of Bognor Regis.

October: We welcomed the arrival of our new Parish Priest, Father Niven Richardson